Chocolate is produced by cacao extracted from the fruit of the Theobroma cacao tree, coming from South America. Theobroma means “the Gods’ food”. In Europe the cacao has been firstly brought as late as in the 16th century although its utilization as food and medicine dates from 1400 years ago.

The chocolate is calories-rich food. It consists of 61 % carbohydrates, 30 % fat substance and 5-8 % proteins. The fat in the chocolate represents intense fat acids – stearic acid (34 %) and palmitic acid (27%), mono non-intense – oleanic acid (34 %) and only 2 % of poly non-intense acids – the linolic acid. Notwithstanding the considerably quantity of intense fat acids in the chocolate, they have a neutral effect in relation with the serum cholesterol and do not bring up to its increase. The chocolate is also a good source of several mineral substances such as: potassium, magnesium, copper and iron which are easily assimilated by the organism. 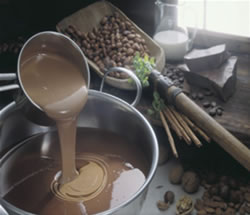 In the chocolate there are active substances belonging to the methyl group – theobromine, caffeine, and teophiline – which bring up to its astonishing effect. Unlike the coffee, the chocolate contains less caffeine and its consumption does not lead up to insomnia, overexcitement, and unpleasant personal feelings as far as cordial system is concerned. A club of milk chocolate of 40 gr. contains 10 mgr.caffeine, and a natural black chocolate – 28 mgr. while a cup of Nescafe contains 60 mgr.

The specific favorable effects of the chocolate on the cordial system are due to biologically active substances of the group of polyphenolics. They are natural substances containing in the plants and are of a quite big quantity in the fruit, the vegetables, the cacao, the tea and the red wine. In the cacao they reach up to 20 % and their quantity depends on fabrication processes of the cacao grains – drying, fermentation, baking.

The polyphenolics combine a series of class aggregates with different chemical structures but the common between them is that all of them have anti-oxidant characteristics. The polyphenolics in the cacao and in the chocolate belong to the group of the flavonoids whose general subclass is the flavanolics – major flavonoids in the cacao grains. The cacao and the chocolate contain a great amount of simple monomer molecular flavanolics – epicatechine and catechine which are also isolated by the tea and the red wine. The quantity of flavanolics in the chocolate is four times bigger than in the tea. The cacao products contain enormous amounts of flavonolic molecules, named procianidins. In 40 gr. chocolate there are 140, 2 mgr. procianidins, while in a glass of wine they are 20, 3 mgr. and in the apple – 12, 3 mgr

The chocolate anti-oxidant effect is in the foundation of its prophylactic impact on the cordial system. This is because of the higher quantity of flavanol in it. It helps the cell to fight the free radicals, which have an unpleasant impact. The chocolate anti-oxidant capacity corresponds to the quantity of procianidins in it and is larger than that in the fruit and the vegetables. The consumption of food rich of anti-oxidants prevents from cordial problems, degeneration and some kinds of cancer.

In the foundation of cordial diseases sits a series of factors – heredity, physiological characteristics and way of feeding. The oxidant effect of the cholesterol in the lipoproteins with a low density (LLD cholesterol) is one of the general mechanisms for the initiate harm of the blood vessels, followed by a formation of atherosclerotic plaque and fiber degeneration. The polyphenolics in the chocolate restrict the oxidant effect of the LLD cholesterol and enhance the overall anti-oxidant capacity of the blood. The consumption of chocolate leads to a reduction in the inclination for thrombus formation and prolongs the time for blood coagulation by increasing the prostacyclins level and reducing the lephcotrienitс level responsible for inflammable processes. The chocolate brings up to the maintenance of normal circulation and cordial activity influencing the synthesis of nitrogen oxide, which reduces the tone of the blood vessels. The flavonoids in the cacao regulate the immune function by reducing the production of citocins.

There is no considerable proves that the consumption of chocolate may bring up to obesity. There is no food found which can be blamed by itself for rising obesity. Obesity is a consequence of non-balanced feeding combined with limited motor activity.

Tooth caries, one of the major reasons for avoiding chocolate, is more due to bad mouth hygiene. The cacao does not suggest a high risk of caries and this risk is considerably lower than in the food consisting of refined sugar. Despite that the polyphenolics in the chocolate suppress the development of bacteria in the mouth which are the foundation for caries formation in the teeth. There is a common claim that the bioactive amino acids cause headache and migraine. But there has not been found any dependence between headache and chocolate consumption. Stress and menstruation have considerable importance for that and very often the consumption of chocolate is combined with them and this is why a lot of people think headache is due to chocolate receipt.

Chocolate addiction is a very common phenomenon, twice more typical in female sex. In its mechanism take place bioactive substances such as caffeine, thiramin, phenilalanin. The last ones have an effect similar to the amphetamine though much less strong. Recently there has been isolated a neuroactive alkaloid which might possibly bring up to the chocolate addiction. After all this is not an addiction which can be regarded as unhealthy, but a pleasure of the flavor and the aroma of this incredible food.

It can be definitely said that the chocolate is a healthy product and when consumed in normal rations gives not only pleasure but also has a favorable effect on the organism.